Ugh. Sex after betrayal.
As if it's not enough that we feel as though our hearts have been plucked, still beating, from our chests and feasted on by the OW, we will sometimes sooner sometimes later be expected to bare our bodies to the person who betrayed us.
Double ugh.
Even after the hysterical bonding has cooled down, perhaps after a period of sexual anorexia, eventually – hopefully – we will want to respond to a physical need for intimacy and an emotional need for connection.
For some of us, the healing that can follow betrayal will easily make its way into the bedroom. For others, like me, the healing that has followed betrayal screeches to a halt outside the bedroom door. But, I'm increasingly forced to admit, that's a huge sign that there's still much healing to be done. And it needs to be done largely within myself.
My therapist calls it "sexual trauma" and for a long time I resisted that label. It made me feel damaged. But betrayal does damage us. Not irreparably, not all of us anyway. But profoundly. Betrayal, for far too many of us, is confirmation that we're faulty. That we're not enough.
Our path to healing involves understanding, truly and deeply, that is a lie. The "faulty" or "not enough" script comes from long before our spouses cheated. It's rooted in childhood or adolescence. It's a message we got from our parents, or siblings, or teachers or schoolmates or the culture around us. And then, just when we thought we found that person who sees us, truly sees us, as whole and that maybe, just maybe we can begin to believe it too, we discover the betrayal. "See?" we say to the universe. "I knew it. I knew there was something wrong with me. Why else would he cheat?"
The answer, as those of us further along the path to healing know, is that there was something wrong with HIS thinking. The answer lies in the stories he was telling himself about his own worth, his own needs. But that's not your stuff. Your stuff is about about ensuring that you don't build such a hard shell around yourself that sex becomes little more than scratching an itch, or becomes such a frightening prospect that you ignore it altogether.
Which brings me back to the point of this post. Sex, post-betrayal, is scary. But so are a lot of things worth doing.
My therapist, who I've recently begun seeing again for the sole purpose of helping me get my groove back, said something recently that resonated with me. She often takes groups to Kenya. Some clients take the trip more than once, and to those clients she says, "see Kenya through Zen eyes." In other words, she explained, no matter how many times they've seen the same things, she urges them to look at it as if for the first time.
My husband and I need to come together as if for the first time. We need to banish the baggage of betrayal to the basement (how's that for alliteration?) and come together as if we know nothing about the other. To find out what each other likes. To learn what each other doesn't like. To look at each other as if we've never really seen each other before.
Which, post-betrayal, is a really great approach but no less scary. We are different. Far different than the couple who clung together on D-Day as if we were drowning in pain. Far different than the couple who slogged through that first, and then second, year, wondering if we had the strength, the patience, to rebuild a marriage that had revealed a lot of holes.
And now we've fallen into a comfortable pattern. We talk more, we share more, we love better and more deeply. But I, at one point, drew a line around sex and put up a whole lot of Do Not Cross police tape around it. I became terrified at the prospect, despite a lifetime of loving sex. I wept at the idea of being naked in front of my husband – I felt so incredibly vulnerable.
He couldn't understand. "Because I feel hideous," I managed to finally say. His face measured pain and surprise. "But you're gorgeous," he told me.
No matter. I might feel gorgeous when I'm fully clothed. But take that armour away and I'm a woman terrified that he'll see I'm "faulty" or "not enough."
That's the old story, I know. That's the narrative I've spent years trying to erase or rewrite.
Sex after betrayal is where our wounds are laid bare. It's the arena in which we feel, perhaps, more vulnerable than anywhere else.
I'm learning though that it's an arena worth entering. That my vulnerabilities are also where my power lies. My strength is in letting my husband see those vulnerabilities, confident that I have built a strong enough foundation that no matter what anyone else says or does, I can know that I am enough. That I am not faulty.
That I am gorgeous.
Posted by Elle at 12:49 PM 67 comments:

Getting Past the Fear of Uncertainty

The Woman and The Child: Which Am I? 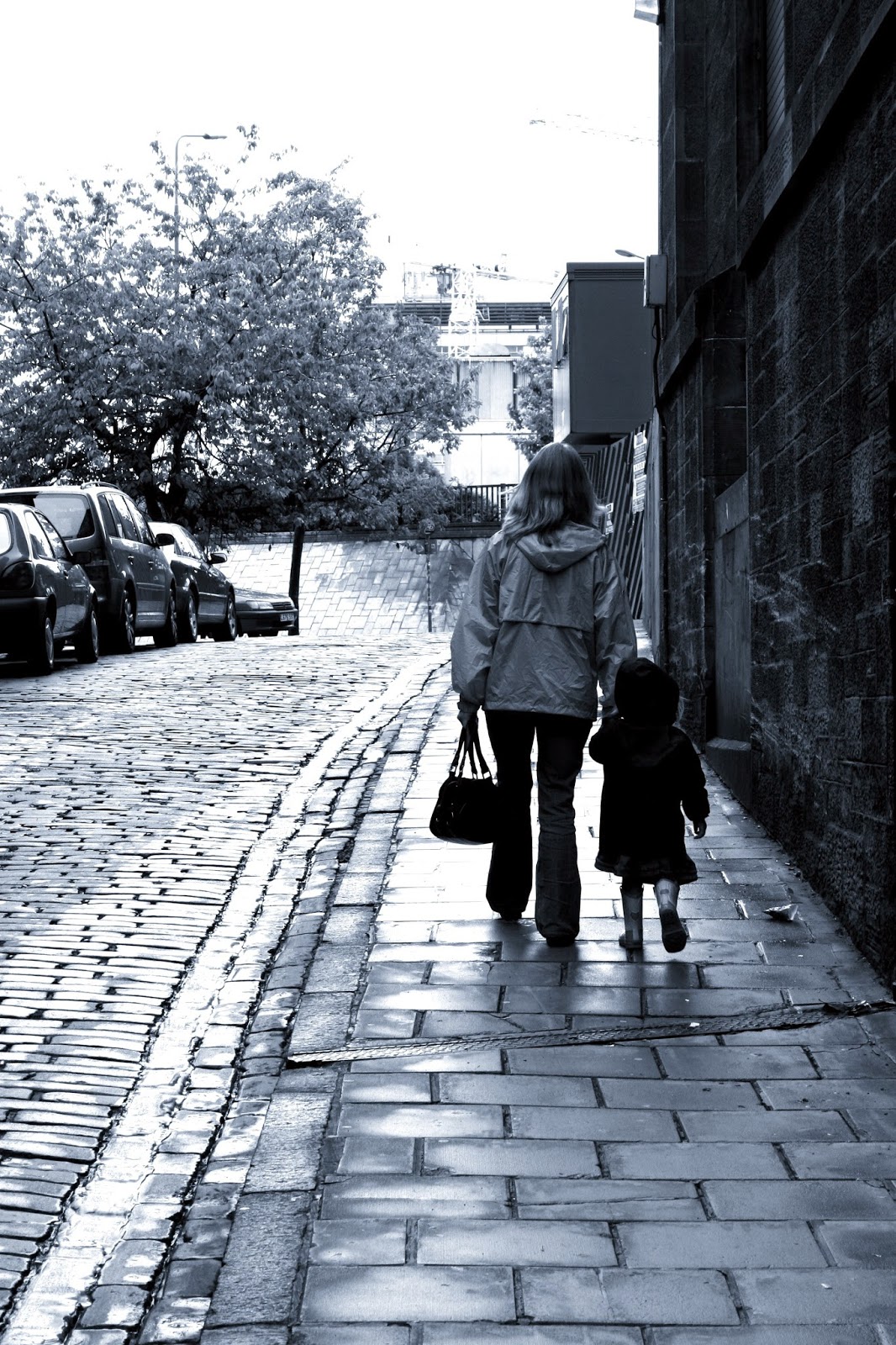 The truth is I'm both.
I'm a woman when I'm able to trust myself and my ability to handle whatever comes my way.
I'm a child when I feel frightened and small and threatened.
And only recently have I become really aware that I can control which "me" arrives to face whatever situation has arisen.
This past week, for example, I've been cranky. The holidays have been long and, since I work from home (a generally silent home), I've been getting little done. I missed working. I missed quiet. I missed my own company, which felt drowned out by my husband's larger-than-life personality.
I resented him and began counting the days before he would return to work.
But in the process of recognizing that I was looking forward to him NOT being here 24/7 was the recognition that he might feel the same way. And that is terrifying. It's one thing for me to admit that I've had enough of him…but quite another to acknowledge that maybe, sometimes, he's had enough of me. My "child" is triggered, fearful and anxious. Abandonment seems imminent.
In the past, I might have been aware on some level that my fears around abandonment loom large. I've long known that I hate being left…I far prefer to do the leaving, even for something as innocuous as a trip to see a friend.
This time, however, I understood on a deeper level just how much my "child" distorts my thinking. Something as normal as a husband getting on my nerves gets blown out of proportion and I convince myself that our marriage is doomed. Or more to the point, that I will be left.
I've learned, albeit slowly, that this is old stuff. This is my "child" curled in a ball, feeling powerless and scared.
So I tried something different. I imagined myself being left. I imagined that, even though there was absolutely no evidence that my husband was planning to file for divorce rather than simply returning to work after a long holiday, I was being abandoned. I imagined that he was having another affair and I would be blind-sided.
My heart beat faster. My breathing became shallow.
And then…I realized that I was not a child. I was a woman with all the resources available to me that women have. I could contact a lawyer. I could lean on friends. I could access whatever I needed to get myself through a challenging time.
I've done it before…and I can do it again.
And in that moment, I realized how often I relinquish the floor to the child I was instead of the woman I am.
I hear it sometimes in the letters you send me. I hear the fear of abandonment. I hear the anguish of those who feel small and powerless. I hear how betrayal triggers our deepest fears -- that we're unlovable, that we're not enough, that we will be alone.
But within those letters, I often also hear something great. Strength. Determination. An ability to rise to the occasion. Some will say they take heart in others' stories of survival because that means that they, too, can survive.
Acknowledge that scared part of yourself that is triggered by betrayal. But be sure to remember too that we women are a force.
Posted by Elle at 2:30 PM 22 comments: