"Wholeness does not mean perfection:
it means embracing brokenness as an integral part of life. Knowing this gives me hope that human wholeness –
mine, yours, ours – need not be a utopian dream, if we can use devastation as a seedbed for new life."
~Parker Palmer, A Hidden Wholeness: The Journey Toward an Undivided Life
Posted by Elle at 3:00 AM No comments:

Email ThisBlogThis!Share to TwitterShare to FacebookShare to Pinterest
Labels: betrayed wives club, how to heal from his affair, Surviving Infidelity

The Door is Not Locked

Glennon Doyle, author of Love Warrior, survivor of marital infidelity/sex addiction, and host of We Can Do Hard Things podcast was talking about why she moved from one state to another. She was surrounded by people, she says, who not only didn't "get" her, they were actively hostile. And she was reminded of something she told herself when her marriage felt untenable: "The door is not locked."

It's something that applies, metaphorically, to so many things in our lives that feel un-leave-able. The toxic boss we think we have to continue to please because "it's a tough job market out there". The cruel friend we continue to tolerate because her cruelty is couched in assurances that she just wants us to be happy. The parent who demands our loyalty because "look at all I've done for you".

And yes, the marriage. The marriage that now bears the mark of infidelity.

The door is not locked.

Believing it is locked keeps us trapped. It keeps us tolerating the intolerable. It keeps us responsible for everyone else's happiness. I told myself that my children needed stability, which isn't untrue. But it held me in place. It kept me from even testing the door to see it gave, even an inch.

Maybe you need reminding that the door is not locked. You have choices and they run the spectrum – from leaving entirely, to a trial separation, to rebuilding together. And you have so many other choices too. To quit that job that makes you feel useless and unvalued. To join a group of people who share your interests. To find a good therapist. To leave a lousy one. To lay down boundaries with friends, parents, children that give you the space you need to love both you and them simultaneously.

A locked door is a story we told ourselves. The door is not locked, my secret sisters. It never was.

Email ThisBlogThis!Share to TwitterShare to FacebookShare to Pinterest
Labels: Glennon Doyle, how to heal from his affair, Love Warrior, my husband cheated, should I stay in my marriage after an affair, Surviving Infidelity, We Can Do Hard Things

Using a "Turnover" Event – Like Betrayal – to Rebuild Your Life

Times like this — not just a terrorist attack or a worldwide pandemic but also other big moments in life like childbirth, divorce, death — you have a feeling about what's right for you, just like people in my 9/11 support group did. It was very clear to each of us who felt passionate about going back to work and who felt going back to work was insane given the world's events. I remember the psychologists in the room saying there is no right answer — there is only the right answer for you.  ~Penelope Trunk, blogger

They're called "turnover" events, according to the psychologists – events in which circumstances change everything. They can be happy, such as the birth of a child. Or they can be catastrophic. A car accident, a pandemic. Or, yes, betrayal.

Betrayal might be invisible to those around us but it shifts the earth beneath our own feet. It changes everything. It's different than marital breakdown because that often happens slowly. Betrayal blindsides us. Even if we knew something felt off, we never quite imagined this.

And so we face a new reality.

In the early days, of course, it's enough to get through a day. It's enough to brush our teeth, get dressed, manage to somehow care for kids or do a reasonable facsimile of our job.

But with time, we face different choices. If we have chosen to remain in our marriage, what is that going to look like? What do we need in order to stay? If we have chosen to leave, well, what does that look like? What I'm suggesting – what Penelope Trunk, a trauma survivor, and the psychologists she quotes are suggesting – is that these events hold an opportunity for us, if we're willing to consider it: To choose a different way of living in this world.

These choices don't have to be huge to the outside world. For instance, after discovering my husband's infidelity, I became completely intolerant of dishonesty. I had known that he tended to lie. About stupid stuff. I would hear him on the phone with his mother explaining that he wasn't coming to visit her because he was "swamped with work" or the "kids have so much going on". I knew that if he wanted to visit her, we could have easily made that work. But the truth was he didn't want to visit her. He hated visiting her. But that truth remained hidden even from him. And so he lied. And I let him.

After D-Day. Nope. But not only was I intolerant of dishonesty in him and others but in myself. I noticed that I, too, often chose dishonesty over discomfort. So much easier to tell a friend that I wasn't feeling well than say that I didn't want to attend her Pampered Chef party. So much easier to tell an editor that a source hadn't called me back than tell her that I forgot to send the email. I became as disgusted with my own dishonesty as anyone else's. And though that might not seem like a transformative change, don't be fooled. It absolutely is. Being honest with myself and others has utterly changed my relationships. Resentment has a much harder time taking root when we're honest with ourselves and others.

Of course, there are the far more obvious changes we make. The job we leave, the job we seek, the friends we edit into or out our lives. And while I am not, will not, even look at infidelity as a good thing, I can recognize that it offers us something, if only the freedom to make different choices. When it feels as though we're living in ruins, why not see what we can construct? 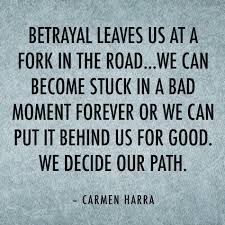