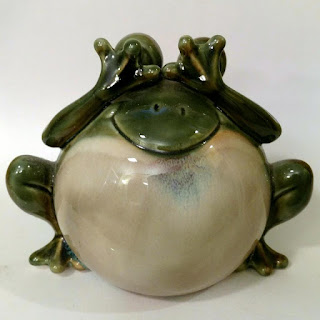 We've all heard the analogy of the frog and the boiling water, right? How a frog put into a pot of water that's slowly heated until it's boiling won't jump out because he's only barely aware that the water is getting hotter. It's happening so incrementally. Yet, if a frog is dropped into a pot of boiling water, he'll leap out with a "yikes, no way" (assuming frogs can talk).

How many of our marriages are slowly boiling water? How many of us are oblivious frogs?

How many of us stay because it's Just Enough for us?

How many of us, when our husbands stop showing up for us, turn to girlfriends, to sisters, to work, to hobbies? Maybe to less healthy relationships, like food, over-exercising, booze or drugs?

A lot of us are queens of Just Enough.

Just Enough might have us occasionally wondering what's wrong but all too quickly blaming ourselves.

Just Enough is believing him when he says he's working late, that he's stressed, that he doesn't know what we're talking about, that we're just acting jealous, or crazy.

We hang our entire lives on Just Enough.

What if, instead, we imagine ourselves, a decade ago, being dropped into the water in which we're in right now? Would we stay? Or would we jump the hell out? Would we scream no way!?

Would we second-guess ourselves? Or would we know we already know, deep down? Something's wrong. I don't like this. I can't live in this situation. It is harmful to me.

Would we demand the truth, even after he insists he's giving it to us? Would we insist on seeking outside help, even if he says we're being ridiculous? Would we pack our bags because if no matter what he says, this isn't okay for us, this isn't healthy for us?

What changes when we conclude that Just Enough is a death sentence? Either for us or our marriage?

Just Enough is our warning that we're in dangerous waters. That something has to change in order for us to thrive, to be our best, to parent well, to live well.

The change can be us, it can be him, it can be our marriage. Ideally, it's all of those things. Because Just Enough is actually Not Enough At All.