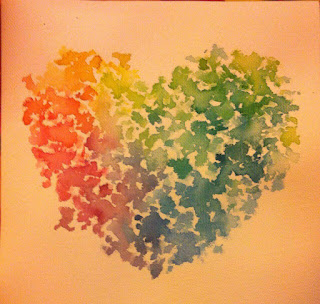 My 18-year-old daughter, who's two hours away at university, called me on the weekend. She needed to talk, she said. There's this guy, she said. She likes him.
But? I said.
She's afraid, she said. Every time she likes someone, it ends in heartbreak. Even when she's breaking the other's heart, it hurts too much, she said.
Better, she told me, to just not take the chance.

I remember teen heartbreak. I remember being so shattered by a longtime boyfriend who took up with my best (ha!) friend. I remember realizing that heart+break was the perfect description, so sure was I that I had felt my heart literally shatter. The pain was physical as much as emotional. It hurt to breathe.
And it hurt for a long time.
Even years later, my stomach would twist at mention of either of their names, at a chance encounter with either though they had long since broken up.
And though I fell in love with another, my not-quite-healed heart left me vulnerable to choosing someone else who wasn't, in hindsight, the best choice. Relying on another to heal my broken heart was a mistake, I've learned. Heart healing is an inside job.
It's also part of life, I said to my daughter.
Sure she could simply avoid making herself vulnerable in any way and, therefore, avoid heartbreak, I said.
But at what cost? It's possible this boy isn't interested in her. But, after the sting of rejection fades, she'll be fine as long as she reminds herself that another's assessment of our worth is inherently untrustworthy. Like asking a coal miner to gauge the value of a diamond.
Of course, they might fall madly in love. They might experience that incredible feeling when someone you think is just awesome thinks the exact same thing about you. And together you experience that mad rush of new love that makes the world seem so beautiful that your heart can't contain it all.
And it might end, leaving them with shattered hearts.
But, I reminded her, she's been hurt before. And she survived it. People she felt deeply wounded by inspire little more than a "meh, whatever" from her now.
Hearts are resilient, I told her. Especially hearts as huge as hers is, hearts that make room for so much and so many.
And the risk is so worth it.
But it starts with stripping ourselves of armour, of fear that we'll be hurt, of that deep shame that tells us we're unlovable. It starts with recognizing, as Brené Brown says, that being alive means being vulnerable.
And it starts with understanding that the very thing we think makes us vulnerable, emotional exposure, is also what fuels a beautiful life. Being willing to stand exposed, to be seen with all our flaws and trust that we are lovable, is the whole point.
Yes, it's scary but that's what courage is. Being scared and doing it anyway.
Yes, it's hard when we know the pain of heartbreak but that's what resilience is. Remembering the pain but being willing to try again. Trusting in our rusty old tool box, the one filled with self-compassion, with kindness, with self-respect, to tend to a heart that gets bruised or battered again.
And yes, it's worth it. Even this formerly shattered wife who, at one point, imagined death as preferable to another moment of the pain of betrayal, would risk it all again. Is risking it all again. There are no guarantees, save one: Closing ourselves off from connection ensures a smaller greyer life.